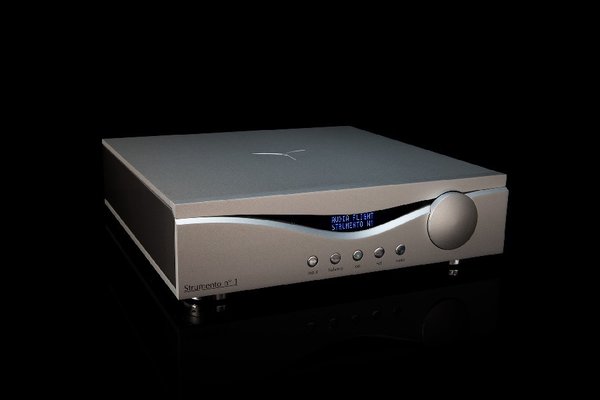 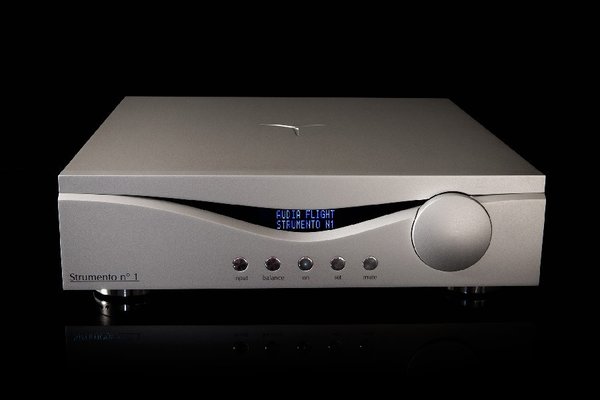 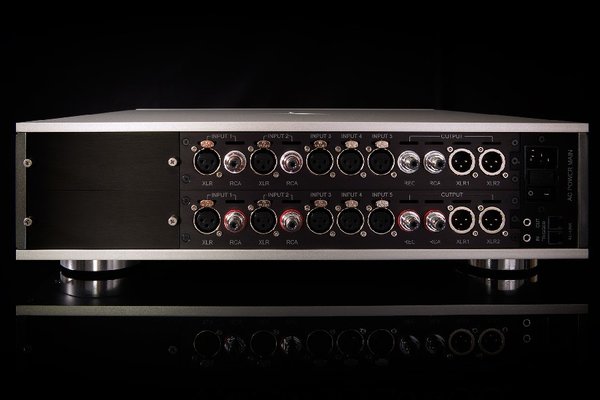 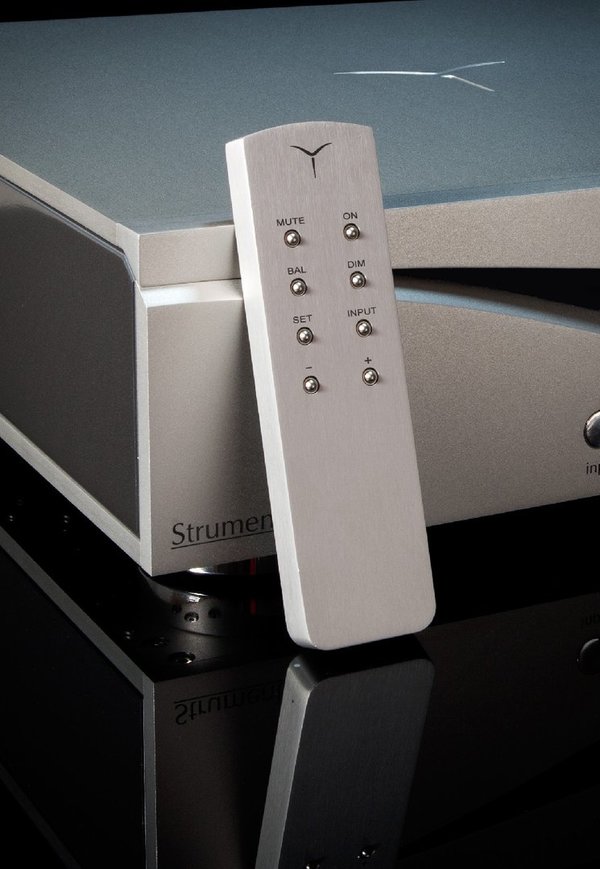 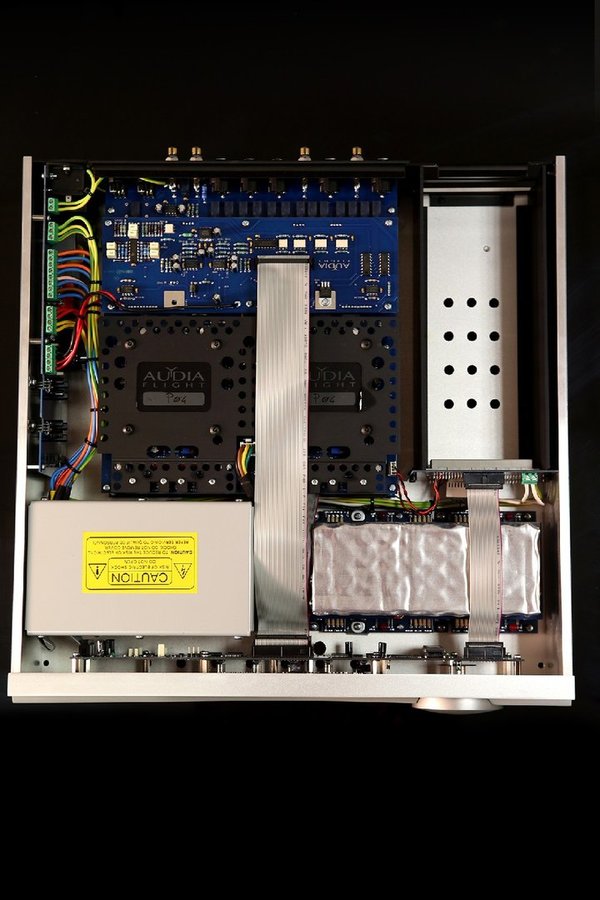 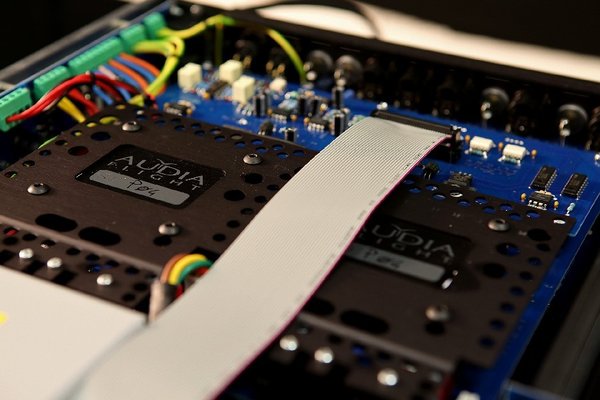 It has long been said, “the heart of any audio system is the preamplifier.” The preamplifier’s job sounds simple: convey a purity of sound, without
coloration or adulteration of original audio signal, with nothing being added but also nothing being lost in translation.
Okay, so it’s not that easy. And yet that’s where our efforts at Audia Flight have elevated the preamplifier state of the art.
The Audia Flight Strumento N°1 mk2 Stereo Preamplifier is the perfect device to transfer a perfect signal to any power amplifier with its precision, accuracy, dynamics and incredible signal speed (bandwidth more than 1MHz). We’ve used our trained human ears to aide us with circuit refinements over the original Strumento N°1 (such small, but critical changes include the value of resistors and capacitors). This effort has allowed us to more closely achieve our goal of sonic perfection with the Strumento N°1 mk2, much like a luthier uses years of experience, craftsmanship, and keen ear to find the perfect tonal character and emotional response for their instruments.

The Strumento N°1 mk2 chassis begins its life as an ultra high grade, bespoke aluminum cast. After the CNC finishing work is completed, every part is then closely inspected and “mirror polished” by hand. Some critical areas are further finished by hand, with shot peening and anodization completing the beautiful metal work. The final touch is an elegant silk-screening process.

Within the Strumento N°1 mk2’s gorgeous chassis one finds it is powered by four toroidal transformers (two 75VA toroidal audio transformers for the main stages, one 25VA toroidal audio transformer for the control boards, and one 15VA toroidal transformer for the logic board), all enclosed within a ferromagnetic shield and encapsulated by epoxy resin. The main power supply is extremely low noise, the filter being made by ultra-fast rectifiers and n.40 680µF 100V extra low impedance capacitors. On the electrolytic capacitors an EMI shield and vibration damping material is used to reduce any physical noises to a minimum.The main power supply is composed of eight, very low noise power supply stages. Each amplification channel with its fully balanced circuitry is on an independent print board. Custom printed circuit boards with an extra high-grade surface copper are used, as ultra pure copper bars are used for ground and power supplies. After the input selection and a buffer, the input signal meets the volume control.

A crucial point in all preamplifiers is represented by the volume control. Often the volume control can introduce a variable impedance element as a function of the attenuation value (that is to say, the position of the potentiometer). The undesirable result is that the frequency response, slew-rate
and even the internal impedance couplings among different stages are not fixed and become a function of the attenuation value (volume).
This ultimately reduces the preamplifier’s ability to produce an accurate signal for the power amplifiers to further amplify. For this reason, Audia Flight has developed a constant impedance attenuator. This custom Audia Flight attenuator is composed of discrete components (low-noise metallic film resistors and relays) and provides a gain range as high as 127 dB while providing constant steps of 0.5 dB.
The accurate high-performance result we have obtained with this attenuator likely is well beyond standard attenuators found elsewhere, as our measurements show that the Strumento N°1 mk2 has an out of the ordinary extended frequency response (3Hz / 1MHz –3 dB) and the high value of
slew rate (>250V/µs throughout the entire gain range (-90 / +10 dB).
This completely new volume control has constant impedance and it is absolutely silent as the volume is raised and lowered.

The Strumento N°1 mk2’s gain stage is an exclusive Audia Flight design consisting of an entirely class A current-feedback circuitry.
It is fed by four stabilized independent stages per each channel: two for the input stages and two for the output stage.
The gain stage is enclosed within an aluminum box and encapsulated by epoxy resin to grant a thermal stabilization for all gain stage’s components.
Additionally, a large aluminum plate is used to dissipate thermal energy of the gain stages.
The high-current low-noise output stage is made of Class A biased MOSFET audio devices, and is able to drive any kind of amplifier.